Pride and Prejudice and Zombies

‘It is a truth universally accepted that a zombie in possession of brains, must be in want of more brains.’

So begins the immoral, the blasphemous, and enormously entertaining Pride and Prejudice and Zombies, by Seth Graheme-Smith (and of course, Jane Austen). If the original story wasn’t enough for you, throw in a dojo of ninjas, a couple of beheadings, and hoards of zombie undead, and you have a book worthy of the shelves of Pemberley. Or not. 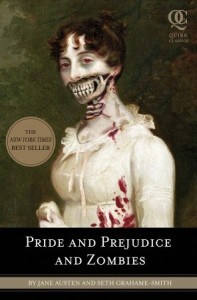 We all know the epic love story between the fiesty Elizabeth Bennett and taciturn Mr Darcy. Upon first introduction, they both find each other equally disagreeable, and Elizabeth is spiteful to Mr Darcy at every turn. This has the opposite effect on him, and after a lot of comments on her fine eyes and love of reading, Darcy falls in love with Miss Bennett, much to his own horror (how could he possibly love someone so beneath himself?).

Most blokes (and some ladies) would agree – a story as saturated with bonnets and tea parties needs a good beheading or two. What better way to get your husband/partner/brother/father to read the book you’ve tried to tell them about for years?

While the book sometimes reads like a one-line joke that has gone on for too long, there are some gold moments, such as the showdown between Lady Catherine de Burgh and Elizabeth Bennet. Or the fact that when Charlotte Lucas becomes a zombie, her husband, Mr Collins, fails to notice, simply because he is the most boring, self-absorbed man in the world.

No doubt about it, Austen purists will revile this book (just wait until Pride and Predator comes out). While Jane Austen is turning in her undead grave, Seth Graheme-Smith has launched an underground sensation, that finally brings the balls back into ballrooms.

It may be blasphemy, but it’s damn entertaining.

Hi, gr8 post thanks for posting. Information is useful!