I’d been meaning to read the book for a while, but the impending movie gave me an extra incentive. So, in about two days, I sliced through Watchmen. I was looking forward to my bus trips and lunch breaks more than ever, because it gave me a chance to slip into a parallel 1985, where superheroes are real, with all the problems that come with being human. 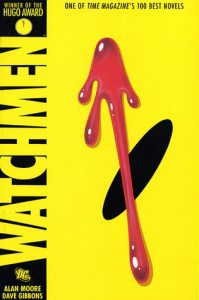 Watchmen is a multi-layered piece of devilish manipulation. In essence, the book is a noir-esque detective story, with Rorschach, the unlikely detective investigating the murder of the Comedian. Joining Rorschach is the Night Owl, a meek retired superhero with impotence problems, Silk Spectre II, living in the shadow of her mother and Dr Manhattan (the blue guy in a mankini). As Rorschach investigates, the world sits on the brink of nuclear war, and he discovers that the death of the Comedian may just be one step in a greater plan.

Each character represents a key part of the American identity. While Rorshach plays the detective, the Sam Spade, the Clint Eastwood and the Outlaw, the Comedian is a misanthropic view of America, wearing the stars and stripes on each shoulder, with a smiley face button that says ‘This is all a joke’. On a deeper level, he is the antithesis of all that America has become; at one point shooting down a row of protesters while shouting ‘I am the American dream.’ He is all that America fears about itself, the brash face of ultra-violence, the tool of political men. And yet out of all the superheroes, he is the most accepting of his own nature.

Apart from the use of nine panel designs, other narratives weave their way through the use of multi-textual elements, such as newspaper clippings, files, criminal records and even a comic book sits within the comic book. Dave Gibbons’ use of background elements, such as graffiti and wall art declaring ‘Who watches the Watchmen?’, and his attention to detail, contributes so much to the atmosphere of the book, that it is a prime example that what lies within and without the frame is the strongest editing tool in the graphic novel.

Added to this, the story is enthralling. Following the lives of these superheroes is more dramatic than a noon day serial. It is a book not easy to put down,  until the bitter, climactic end, where we must face the truth not only about these fictional heroes, but our own misguided politics. By deconstructing the American hero, Alan Moore, and equally Dave Gibbons and colourist John Higgins, deconstruct the American dream, confirming the reader’s suspicions that we live in a world forever changed by the advent of nuclear arms.