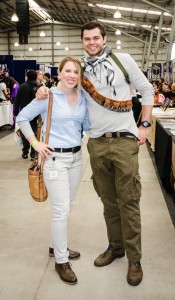 Last weekend I attended Supanova in Melbourne, one of the biggest pop-culture conventions in Australia. I’ve been a couple of times before and always enjoy getting to meet authors and artists, as well as cosplay (did I mention I love cosplay?).

Over the years I have become a fan of subtle cosplay – while I love the all out effort of some of the incredible costume creators, lately I like things that take a little bit more effort to think about, but the fans get it. So this year my husband and I cosplayed as Nate and Elena from Uncharted 3. Uncharted is one of my fav game series – it’s got such a unique combination of puzzle-solving and action, and some incredible storylines.

One of the best things about going to cons is meeting authors! My first stop was hanging out with my friend Tracy Joyce at the Odyssey Books stall.

Tracy is awesome. She’s one of the first people I met when I moved to Melbourne and since then we’ve got up to all sorts of crazy shenanigans at SFF conventions. 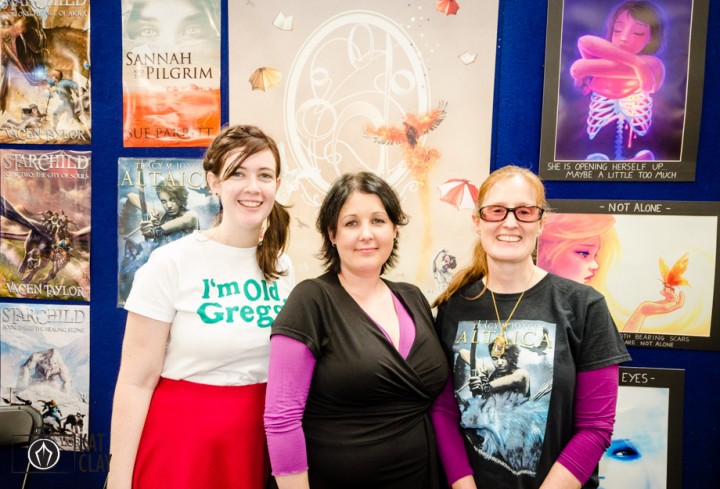 Later I attended the talk with John Scalzi and Peter F Hamilton on THE FUTURE! Okay, so I recycled my program before I wrote this post and I can’t remember the name of the panel. Something, something THE FUTURE!

But I got a lot out of it as a writer. Scalzi made the point “Don’t over explain” in regards to creating science in your fiction. If you’re vague about your science then the nerds will try to figure it out, but if you’re specific and you get it wrong, then they’ll call you out on it.

Hamilton suggested that a good idea is to look at how current technology will affect governments and culture, and to extrapolate from there. It reminded me of Ursula Le Guin’s introduction to The Left Hand of Darkness, where she discusses the idea of asking “What if?”

They also discussed the importance of looking at how people use technology, not ‘what’ the technology is – for example, describing the specs in much the same way as a gadget store.

Peter Hamilton admires the sense of wonder and positive science fiction, rather than dystopian, and it was a timely discussion about Iain M. Banks’ Culture novels, as I’d just finished reading The Player of Games. Hamilton made a good point that just because something is an optimistic version of the future, that conflict still exists as not everyone wants to live in a utopian society. Which is exactly the point Banks makes in The Player of Games, and also in another of my favourite science fiction books, Ursula Le Guin’s The Dispossessed, which both question what defines a perfect society.

I’ll leave you with some pics from the con – I didn’t go all out documentary photographer mode, because I was there to have fun. But there were some incredible costumes there including my favourite, this young lady playing C.M.O.T. Dibbler with her very own walking stall complete with a stale bread roll among other “treasures”. I did spot a Wizzard running around too, but he must have been busy chasing after his luggage.

If you are in any of these pictures, please email me at [email protected]. I’d love to send you a copy.