Sometimes it’s hard to keep writing. Then there are weeks like this.

It’s a hard slog being a writer. No matter what form you practice, rejection becomes a part of life. You’re constantly slapped in the face with your apparent failures (I say apparent because most rejections are not personal, but it’s hard not to take it personally). 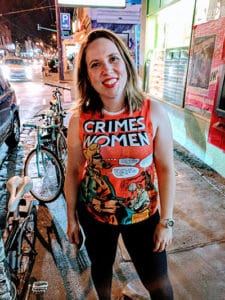 I’ve been writing on and off for 12 years. For a long time I was terrified of putting myself out there, so I stored up stories on my hard drive and never sent them to anyone. It’s in the last two years I’ve started to take it more seriously with the publication of Double Exposure. I’ve finally got involved in the community and started promoting my work, as much as I hate self-promotion. Yet for the most part, I’ve been working away on my books and stories in solitude.

I’d been inspired by a number of friends, especially Aidan Doyle (serial story submitter), to put more work repeatedly out there and aim for 100 rejections in a year. It turns out if you don’t send your work out, you’re not going to get any rejections, but you’re also not going to get any sales either. This year I vowed I’d submit more work to magazines, websites and awards. Yes I’d probably get rejected.

It started when I sold a story to Crimson Streets, an online pulp-fiction magazine. I wrote A Woman Walks In back in my uni days and while it’s changed a lot since then, I really wanted to find a home for it. After several rejections, it got accepted! The old Kat would have given up at one rejection (and probably did, which is why this story took so long to get published). But I kept persevering with this one because I knew it was a good story. It’s coming out in June.

I’d entered this way back in November as one of the first of my scary putting myself out there attempts. A couple of months later I got an email saying I was on the longlist with a heap of other people. But then, I got an email to say I’d been shortlisted along with six other people. I knew I had a decent shot as the theme was Growth, and I’d just written a horror story about a dodgy backpacker who gets infected by a coral reef. Talk about good timing. The story will come out later this year. Exciting stuff!

Tuesday: Reading at Noir in the Bar

I got to read an excerpt of my novella alongside some incredible Aussie crime writers, including Iain Ryan, Emma Viskic, Jock Serong, Andrew Nette, Liam Jose and Leigh Redhead (who read the most hilarious crime story I’ve heard in a long time). Jock’s desert island surgery sequence from his new book made everyone squirm. The event was held at the Grub Street Bookshop (go buy books from them!) with standing room only. I still get nervous reading my work, especially when I haven’t prepared, but apart from a dry mouth it went well. Ended up buying Gunshine State and The Rules of Backyard Cricket. Darnit, can’t walk into a bookstore without buying things.

Well, to top off a crazy week, I found out my essay on William Sansom and the Long Sheet published over at Weird Fiction Review, had received an honourable mention in the Australian Shadows Awards. I found out but it didn’t really sink in until my husband called to say “Did you see you’ve been mentioned on some big award?” I feel pretty awesome receiving this recognition as I’ve been writing for WFR since 2012, and it’s such a love project for me.

So what’s the moral of the story?

Keep going. Put yourself out there. It’s a hard slog, but the hard work pays off in the end.

Thanks Zoe! I had a pretty awesome week after this too and found out I’d been nominated for a Ditmar award! You never know what’s around the corner.

More weeks like this to come for you, I hope! Thanks for being transparent about the rejections and how hard it can be, helps put them into perspective.

Way to go! Sounds like an incredible week! I appreciate your advice to keep writing and to continue putting yourself out there, despite rejection. Great post!

Wow congratulations! This is incredibly inspiring. Thanks for reminding us all to just go for it!

What a fantastic week! Congratulations! And I need (almost constant) reminders of the importance of putting ourselves out there, so thanks for that too 🙂

That is quite a week!

I’ve been trying to submit my work lately and have gathered more rejections this year than I have in the last few. It can be a bit disheartening, so I appreciate the reminder that persistence pays off.

Wow! What a week, indeed. It so is a hard slog. But week’s like this put things into perspective. Thanks for the inspiration.
-Alicia-Joy