In June I read a bunch of neon noir books and comics, including Limbo, Leviathan Wakes and Phonogram. Inspired by 80s aesthetic, neon noir embraces the big, bold themes of the decade with the shoulder pads to match. There’s a reason why it’s often linked with supernatural or science fiction themes, given the number of great dark SF films which came out of the period – think Robocop, Aliens and of course, Blade Runner.

In Dedande City, Detective Clay is tasked by a femme fatale to investigate her boss. With a femme fatale, a sassy “assistant” (definitely not a secretary!) and an amnesiac detective. it’s a familiar tale, but Limbo turns the classic hardboiled story upside down.

While this early reliance on film noir tropes set up my expectations for a certain type of story, Limbo slowly reveals a larger tale, taking the moral ambiguity commonly associated with hardboiled and turning it into the crux of this tale. When the surface identities are not all as they seem, this becomes a more complex tale of fate, morality and whether choice plays any role in destiny, through the vehicle of the classic hardboiled tale, where a woman gives a detective a chance to solve a crime.

While there’s a reason for Clay’s ambiguity as a character, he’s somewhat distanced from the story. For me, it’s Sandy who steals the show, channelling digital voodoo through music.

I’m in love with Caspar Wijngaard’s amazing illustrations. Visual references abound to 80s cinema, from Tron to Back to the Future II. There’s a perfect example of visual narrative in this two page spread, where the eye is directed around the page like a game of snakes and ladders. The thoughtfulness of this storytelling sets Limbo above other comics.

Non subtle reminder that The LIMBO trade paperback is available to buy. Take a trip through the Televerse and Beyond pic.twitter.com/wJmJLr4K7V

I loved the little details of the neon illumination and the colour scheme for each character, such as the femme fatale’s rich, red attire with glowing earrings. The style and story references the Day of the Dead, which reminded me a little of the classic point and click adventure game, Grim Fandango.

I must admit to having a soft spot for works which play with the tropes associated with noir and hardboiled, which is why Limbo appealed to me in the first place. It’s also the first comic I’ve read on a tablet, and I’ve got to say it came up brilliantly on screen, with deep blacks and glowing colours.  Limbo is a well-executed piece of graphic storytelling which is worth digging into for the long haul.

I received a free copy of Limbo from NetGalley in exchange for an honest review. 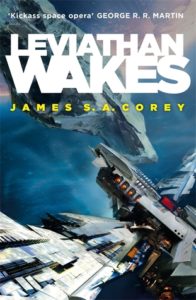 Written by two authors – Daniel Abraham and Ty Frank – Leviathan Wakes is a space opera of epic magnitude. Tired cop Miller and ship worker Holden team together to solve a crime that crosses the solar system involving an evil corporation straight out of classic 80s science fiction films (no spoiler here, as soon as you hear the name Protogen, you know they’re obviously up to no good).

The strongest aspects of the story are in the set pieces, especially the scene on the casino station of Eros. Where the worldbuilding shines is in the multi-cultural diaspora of earth’s expansion into the solar system. We have Indian and Chinese farmers with Texan accents, bhangra music dubbed over the ca-ching of the casino, and strong characters with diverse backgrounds. Station life has the overwhelming nature of an intergalactic marketplace; crowded, hectic, and a hiding place for criminal activity.

As for Miller, he hits all the notes of your classic hardboiled detective – alcoholic, divorced and tired from dealing with the scum of the solar system, you can almost feel the asteroid grit between his teeth.

“He’d lost a marriage to a woman he’d loved once. He’d lived hip deep in the worst humanity had to offer. He’d learned firsthand that he was capable of killing another human being. And nowhere along the line could he say that there, at that moment, he had been a sane, whole man, and that afterward, he hadn’t.”

I won this copy of Phonogram in the Continuum Fan Fund Auction, with a mystery pack of many comics. Similarly to Limbo, Phonogram deals with secret worlds within TV, and the magic of music videos. A young girl sells her soul to the screen in the first pages, which then jumps forward in time, mixing magic, mythology and music.

The writing is dynamite from the get go, setting up the intriguing premise of the “king behind the screen.” While we don’t get to meet this king in the first edition, there’s enough intrigue without becoming too vague. I really enjoyed the way the characters were set up with the dialogue – there’s attitude and plenty of it. Again, music references abound, including a solid sequence inspired by the rotoscoping of “Take On Me”.

Note to self, have just realised that there are comics in the series before this… which would make sense as I felt a little out of my depth in reading this!