Two weeks ago I went up to Canberra for the Conflux speculative fiction convention. Having only moved back to Australia last year, this was my second convention after Continuum in Melbourne. When my friend Tracy Joyce suggested I come, I thought “Why not?” It would be a great chance to meet writers and publishers. Tracy is the author of Altaica, published by Odyssey Books. She’s also a wonderful travelling companion who spent the whole trip boosting my ego and saying nice things about my writing.

Unfortunately I almost had to cancel my trip due to a sudden ear infection, which made me walk around like a drunkard on a pirate ship in high seas. Thankfully, by Thursday afternoon I was well enough to travel (at least medicated enough to make me a space cadet, which excuses any of my bizarre behaviour at Conflux).

On Saturday I was on my first ever literary panel with Jane Rawson, Richard Harland (pictured above) and Aiden Doyle discussing Journeys as Source Material. The discussion ranged from the impact of travel on fiction and devolved into the ubiquitous international toilet stories. For me, travel is an essential part of broadening my horizons and gathering new experiences. Travel teaches us to be observational, not caught up in our digital devices all the time. There’s a distinct influence of travel over my fantasy fiction, whether it is in the cities or people I try to capture.

Another interesting discussion which came out of the talk is the difference between fantasy set in real world environments and fantasy in created worlds. These created worlds can be influenced by elements of our own, but they’re different in the approach to a real world setting which requires much more research. I think it’s important to visit the places you write about, as I did when I visited Transylvania writing my book on Count Dracula. Going to the place provides a complete richness of information such as smells and sounds you can’t get from pictures alone. 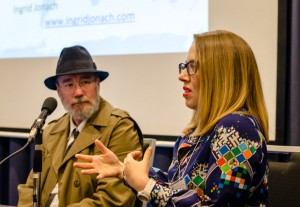 My other panel was on Publicity and Marketing with Alan Baxter, Phillip Berrie and Ingrid Jonach. This was a great discussion to see how other authors promote themselves and the amount of publicity work that goes into promoting even a commercial book release. We discussed the difference between marketing and publicity – marketing is the overall strategy with an end goal, such as to sell books, and publicity is the promotional aspect of that such as interviews, blog tours and even social media. It was well received by the audience and I think there is a great deal of demand for information about marketing for authors and publishers.

Some of the resources I mentioned in the talk include:

If you’ve got any more book marketing questions, please let me know in the comments below.

Some other highlights include:

“what’s the problem with sauron and the ring? He can’t wear it, he doesn’t have any hands!” @kat_clay #conflux10

Conventions are such a great place to meet like minded fans, and I’m looking forward to meeting more in the future! (If the future is still there after the zombie-eco-apocalypse).

Thanks to Tracy Joyce for taking the photos of me during the convention. A DSLR selfie is very hard to do.

Did you have a great time at Conflux? Any burning questions? Join the conversation in the comments below.