A First-Timer’s Guide to the World Fantasy Convention

In which Kat discusses the World Fantasy Convention, writerly adventures and the joys of bagels.

It’s been an intense, insane weekend and I’ve finally had time to sit down and collect my thoughts. Last weekend I attended the World Fantasy Convention for the first time. It was a fantastic experience, one of those defining moments in a writing career, especially being in the early days of my publishing journey.

I received a grant as an emerging writer from the UNESCO City of Literature to attend the convention in order to promote Melbourne, my own writing and foster the development of Australian sci-fi and fantasy writers’ association. I’m extremely grateful to the COL office for giving me the opportunity to go. I wanted to put down some of my experiences and offer some practical tips that I wish I’d known before I went. 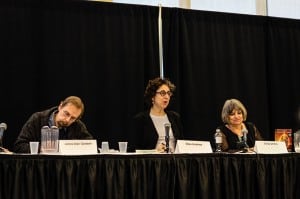 A little about the practicalities of WFC – it’s over four days, there are panels each day like a regular con, followed by evening events and parties (official and unofficial). There is also a dealer room full of books and merchandise as well as an art show, and practical support included in the ticket price such as a hospitality suite which provides breakfast, lunch and dinner. You get a bag of free books for attending, although you can swap them or give them away if they’re not to your taste. There is also such a thing as barconning – which I had no idea about until I got there, which is when people don’t pay for the convention but stay in the bar networking the whole time. This is a thing.

What struck me most is the size of the American and UK markets – the con scene in Australia is relatively small. If you stay in it long enough eventually you get to see the same people at each con. In the states, the genre fiction market is big business. The World Fantasy Convention also differs in that it’s a professional convention, so the room is full of writers, editors, publishers and agents, and less Dr Who cosplayers.

I arrived on the Wednesday after taking the beautiful train ride up the Hudson River to Saratoga Springs with the delightful Kathleen Jennings, and we discovered another Aussie on the train – Russell B. Farr from Ticonderoga Publications. After a few stops with names like Schenectady and Poughkeepsie, it turned into the World Fantasy Express and everyone on the train seemed to be going to the convention. On the first night they had a party in a beautiful local bookstore to celebrate 35 years of Tor, and I got to meet my latest book club author Max Gladstone, who was equally as excited to find out that a book club in Melbourne was reading Three Parts Dead (it’s a great book, by the way).

Over the next couple of days I attended a number of panels, including ones on the relationship between detective fiction and fantasy, fantastic cities, taboo topics, weird fiction (my people!) and visionary horror. I’ll write up my notes from some of the more intriguing panels on this blog. On the Sunday afternoon I got to attend the WFC banquet and see the announcement of the World Fantasy Awards. It was even better when Aussie Angela Slatter drew in the collection category for The Bitterwood Bible. It’s the last year they will also be using the Lovecraft statues as awards, so I’ll be curious to see what is next.

One of the things I found difficult, if not mildly embarrassing at times was not knowing who “big-name” writers were, given they’re not as well known in Australia. So if you do go, prepare to look people up surreptitiously online and use your status as an international visitor to your advantage (too bad if you’re American). Most people are incredibly gracious if you ask them about their work. And if all else fails, talk about drop bears.*

How much does it really cost to go to the World Fantasy Convention?

On a practical level, it can be expensive to go, so I’ll give you a breakdown of my costs in attending the convention in AUD:

Despite the cost for international visitors, I highly recommend going if you write in the fantasy genre, and I hope to attend again next year. I’ve been given the advice to go three years in a row by a few different authors, in order to get to know the community in a continuous way. It’s hard to capture all that I got out of it, but most of all it has inspired me to keep writing and to aim big with my goals.

Here are my best tips for enjoying the convention:

*For those who I discussed drop bears with, here is the link to the Australian Museum’s informative page on these malicious Aussie animals.