As some of you know my Grandpop died last week after a battle with lung cancer. Thankfully I was able to see him before he left this world and attend the funeral. When my mum asked if I would like to say something I found myself volunteering before actually thinking about what I would say. I want to share here the eulogy I finally wrote in remembrance of him. Grandpop was not a man you will find in history books or newspapers. But I will remember him. 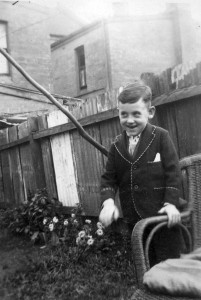 It’s a difficult thing to write about a man who had as many sides as Grandpop. I’d like to share a few memories that stuck out at me on behalf of myself and my sister, hopefully you share these memories too.

My sister and I spent a lot of time at Nan and Grandpop’s as we were growing up. Nan would make us pasta and cheese and we would jump off the Jacaranda tree. As we all know Grandpop loved to spend time in the garage, but when we were young, he was often looking after the canaries down there. I remember when Grandpop took us to see the canaries, all yellow and chirping. One of them had laid three eggs in a nest. I think he took a lot of pleasure in showing us those birds. Grandpop always did have an affinity for animals, be it canaries, greyhounds or good old Tom (the dog).

Grandpop also had a lot of pride in his fruit and vegetables. My sister and Grandpop used to have debates on the best way to grow tomatoes, and I remember Grandpop accusing her of putting steroids into her tomatoes. Whenever there was a batch of mandarins from the tree, Nan and Grandpop would ration them out to the rest of the family. Justin and I would wait eagerly to see how many we got – some years only a couple, one year we got a whole bag. We knew they would be the best mandarins we ate all year, they were so rich and flavoursome.

As mum said, Grandpop was an opinionated guy. We all have experienced in some way Grandpop’s opinions, be it on politics, religion, labor, liberal or the latest Woolworth’s catalogue about the price of ham. When Justin first met Grandpop, he described him later as a “real Aussie larrikin.” As a child, Grandpop seemed like one of the great Australian comic characters, Ginger Meggs. As an adult, he would talk in strine and wave his arms nonchalantly while saying words like “whatchamacallit.”

The only time I have ever seen Grandpop speechless is when I moved back from France after a year abroad. We were standing in the backyard and Grandpop asked if anyone would like a beer. I said yes. I don’t think I’ve ever caught Grandpop off guard, but his mouth just hung open for a minute and then he said “Well alright then. Katherine will have a beer.” Ever since then, I couldn’t visit the house without Grandpop sticking a can of New in my hands.

One of the ways I’ll always remember Grandpop is through a packet of Smith’s original flavor crisps. It seemed that as I grew up, Grandpop was always having a snooze on the brown couch with a packet of Smith’s on his lap, tied up neatly with the bag clip. I can’t unassociate those two things – Grandpop and Smith’s, with the familiar blue packet and crinkle cut chips.

One last thing I will always associate with Grandpop is John Wayne movies. Grandpop loved westerns. He taught me who John Wayne was. I can imagine some indignation as I asked the question “Who’s John Wayne?” For some time I equated Grandpop with John Wayne. This morning I’ve been thinking about a scene in the Searchers, one of John Wayne’s most famous movies. It’s the last scene, where a family is reunited, but John Wayne can’t stay. The world is calling, and he walks out the door and closes it for one last time. I want to end with something my sister said: “I can see you now in heaven’s garage, having a beer with Tom, the canaries whistling away and the races on the radio.” 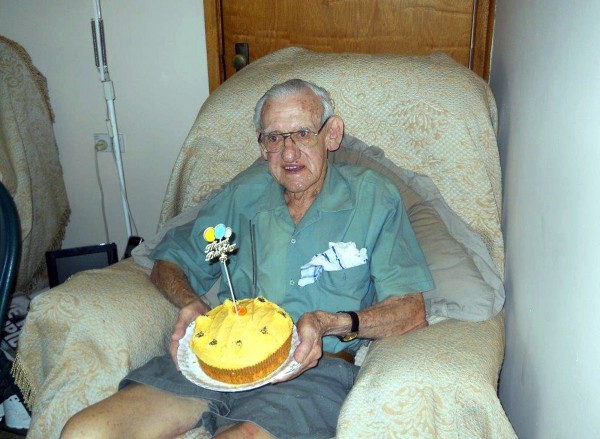 Sorry to hear the news. Lovely remembrance of your Grandpop. He came across as a real Aussie larrikin. When we met him we felt really at ease in his company.