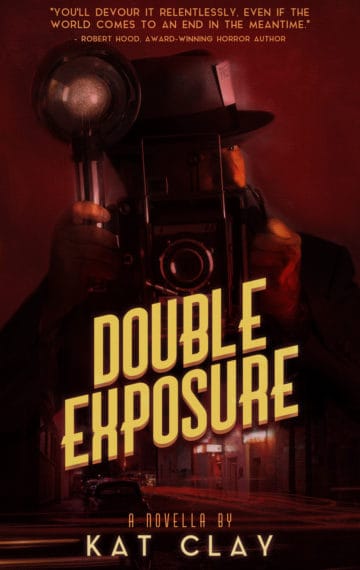 1948. Portvieux City. A scandal photographer shoots a brutally murdered woman through his lens.

But only he can see her.

Thrust into a mystery that threatens his very reality, the Photographer must uncover the truth about the missing woman before he’s framed for the crime. Tracking down an artist that might hold the clue to solving the murders, he delves into the seedy city with the help of Miss Loretta Marne, a society belle with a sinister past.

As the truth comes out, the border between dreams and reality slowly dissolves like a negative in acid. Double Exposure is a thrilling hardboiled horror novella by Kat Clay.

Where to buy Double Exposure by Kat Clay

Double Exposure is available online as an e-book. There are very limited paperback copies of the first edition, available for $10 AUD plus postage and handling (usually $4 in Australia). The paperback has a different cover to the second edition pictured here. To get a copy of the paperback, email [email protected]

“Clay pulls no punches in this noirish tale, offering readers a hardboiled, lively read – engrossing, no-holes-barred, weird yet sharply real. You’ll devour it relentlessly, even if the world comes to an end in the meantime.” Robert Hood, Award-winning horror author.

“Clay is clearly a powerful writer, able to lift images out of the ordinary and into originality.” – The Adelaide Review

“Dark and beautifully paced, DOUBLE EXPOSURE is a fascinating combination of noir styling with paranormal elements that work in a seamless manner. Whilst ensuring that many noir conventions are incorporated – the violence, the doubting internal voice, the femme fatale, the dark places, and the nastiest of human motivation – the inclusion of the paranormal elements and the weirdness of the disappearing corpses doesn’t jar, it actually seems to fit… Cleverly constructed, and particularly for this non-enthusiast for the paranormal, unexpectedly believable, DOUBLE EXPOSURE is written with considerable aplomb and style.” – Aust Crime Fiction

“Poetic, cinematic, and hell of a lot of fun, Double Exposure is a love letter to hardboiled’s dirty past that never lets us forget the urgency of the present. Kat Clay writes like a weapon, an author whose pen takes no shit from anyone.” – Alexandra Heller-Nicholas, author of DEVIL’S ADVOCATES: SUSPIRIA and FOUND FOOTAGE HORROR FILMS: FEAR AND THE APPEARANCE OF REALITY

“It reminded me a little of Paul Auster’s New York Trilogy, another noir narrative that slipped from the hardboiled into something else. That’s a big comparison but the writing here is solid, making this a very well executed debut.” – Iain Ryan

Latest on the blog

There’s a little voice of self-doubt in every writer’s head that pops up saying, ‘this is terrible, no one will want to read this.’